As a result of the fear associated with the spread of COVID-19, live sports in North America have effectively been put on hold for the time being. North American sports leagues, including the National Football League (NFL), National Hockey League (NHL), and Major League Baseball (MLB), have all suspended, delayed and/or shortened their seasons.

In response, sports fans of all ages have been forced to find alternate methods of entertainment to get the sports fix they so desire, especially since the months of April, May and June are typically associated with playoffs and finals – the most exciting time of the year for North American fans.

With live sports on hold, esports has taken over as a great way for fans to show their support for their favourite teams and athletes, even in quarantine. Esports has become a dominant industry during this pandemic, and signs indicate this success would continue well beyond these unprecedented times.

Record-Breaking Viewership and Engagement for Professional Gaming and Streaming

Over the past decade, watching professional video game streamers live has become increasingly popular in response to the various amounts of highly trusted streaming platforms. Sites such as Twitch and YouTube, among many others, allow fans to access their favorite streamers and esports leagues with just a few clicks of a button. Since the pandemic, these video game streaming sites have experienced massive growth and engagement on their platforms.

According to Cody DeBos of The Burn-In, viewership on Twitch was up 30% in March. By the end of April, viewership had grown nearly 50%. Compared to last year, Twitch viewership had risen nearly 101%, resulting in up to 1.6 billion hours watched each month. This serves as a clear indication of how people in quarantine are finding entertainment not only from playing video games, but also from watching others play. Considering this relatively new “streaming” trend has, in recent times, caught the attention of hundreds of millions of people around the world, it’s a great sign for esports.

Part of the reason so many traditional sports fans have turned to online games is because some of their favourite athletes have started participating in esports, streaming video games for their fans’ entertainment. North American Sports leagues have been widely credited with creating esports tournaments that stream online for free and allow fans continue to engaging with their favourite athletes and teams.

In early April, Major League Baseball (MLB) had a representative from each of the 30 teams to compete in an online gaming tournament for the enjoyment of their fans. The tournament was set up using the popular MLB video game, MLB: The Show, with the winner ultimately having a donation of US$175,000 to the Boys and Girls Club of America made in their name. 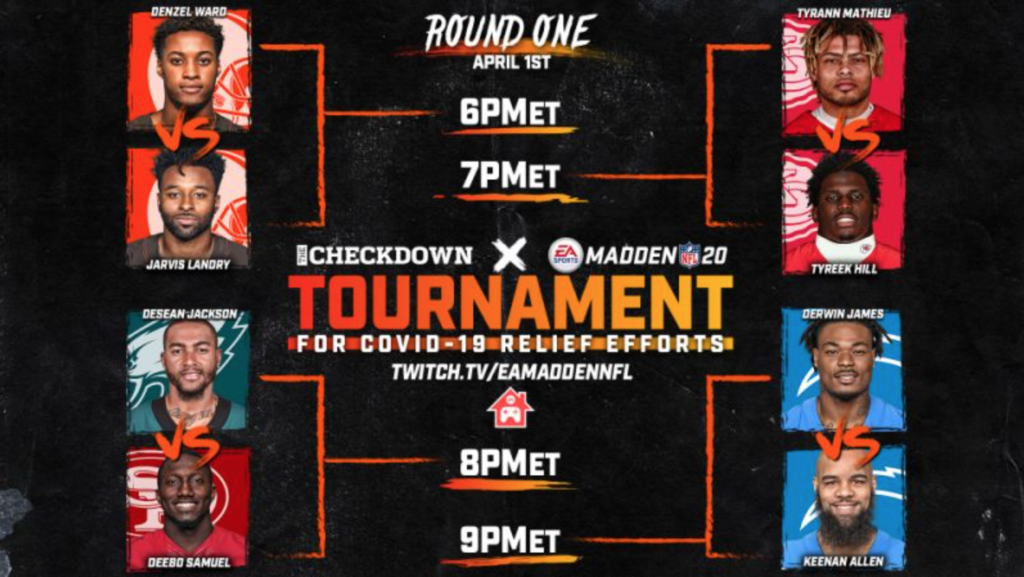 Similarly, the National Football League (NFL) held a player’s tournament through the popular Electronic Arts (EA) video game, Madden 20. This tournament, held at the beginning of April to raise money for COVID-19 relief, resulted in a huge success. Madden brought together 8 all-star NFL players and set up a tournament bracket with scheduled games streamed on Twitch. Fans loved this concept and cheered NFL stars outside of their normal “element.” Because of its success, Madden continued arranging new tournaments featuring more NFL all-stars, much to the enjoyment of fans who continue to tune in.

Esports: The Future is Digital

Some may question the lasting effects the quarantine may have on esports, especially beyond that day when our lives get back to “normal”. While others believe the reintroduction of live traditional sports will have a negative impact on esports viewership and engagement, this most likely won’t be the case given the growth trajectory this industry has established long before COVID-19 even began.

During the past few years, esports leagues have already made lengthy strides in viewership and prize pooling. In November 2018, the League of Legends World Championship Finals brought in nearly 100 million unique viewers online. About three months later, in February 2019, the NFL spectacle that is the Super Bowl (LIII) brought in only 98.2 million viewers – their lowest figures since 2008. To put things in perspective, just over a year ago, one esports championship brought in more viewers than the biggest sporting event in North America. This alone proves how the captive audience of professional gaming already has a massive global reach, and is continuing to grow at an exponential rate. 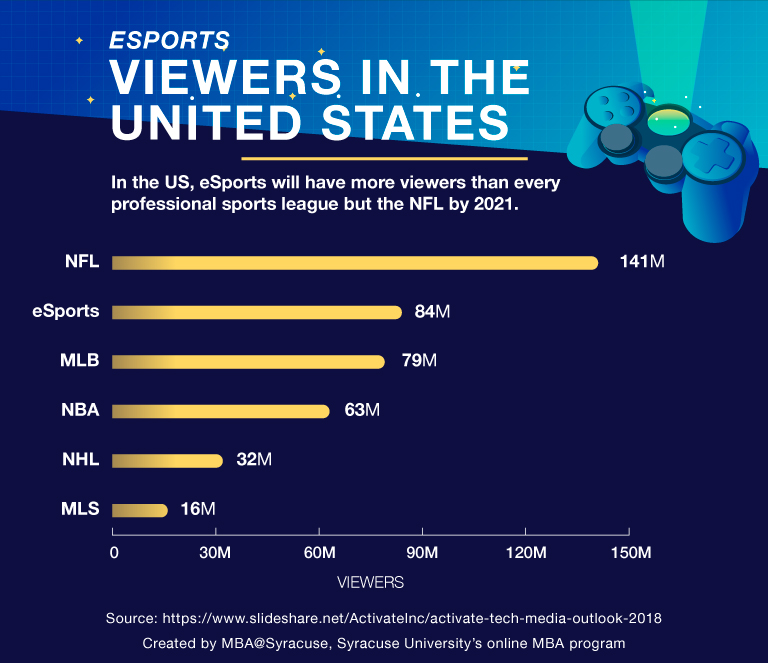 (Image Source: Syracuse University)
According to a study, by 2021, esports will amass more viewers in the U.S. than the MLB, NBA, NHL, and MLS combined. Esports is not only able to co-exist and thrive alongside traditional sports, it is likely to continue enjoying the benefits of the accelerated growth it enjoyed during the pandemic and beyond.

Investing in Esports and Video Games with HERO ETF

Esports has stood out in this challenging economy as an industry that has experienced record-breaking viewership and increasing prize pools. The Evolve E-Gaming Index ETF (TSX Ticker: HERO), Canada’s first esports and video game exchange-traded fund (ETF), is a great way to access the world’s leading companies involved in the esports and gaming industry. These companies include Activision Blizzard, Take-Two Interactive Software Inc., and Electronic Arts (publisher of the popular NFL video game Madden) to name a few.*

HERO was one of only five TSX-listed ETFs (out of 581) to post a positive return during the market downturn in March 2020. President and CEO of Evolve ETFs, Raj Lala recently explained in an interview with Wealth Professional that the success of this fund is closely related to “the big stories of the COVID-19 era” such as social distancing and the work-from-home lifestyle.

For more information about the Evolve E-Gaming Index ETF or any of Evolve ETF’s lineup of exchange-traded funds and mutual funds, please visit our website or contact info@evolveetfs.com