Electric Vehicles On Display at the 2020 Canadian International Auto Show

2020 may only be a few months old, but with dozens of new EV car and truck models set to debut this year, coupled with growing consumer confidence in affordable electric vehicles, it’s easy to see why 2020 is the “Year of the Electric Vehicle.”

And nowhere was that on clearer display than the 2020 Canadian International Auto Show (CIAS),  also known as the Toronto Auto Show. CIAS ran from February 14 to 23 and catered to every car aficionado and gear head’s love of what’s new in the automotive industry.

This year, what’s new was electric vehicles. Everywhere you looked in the main hall and elsewhere, new electric cars were on display and making their debuts. This trend might be why Evolve’s CARS ETF has been off to a good start in 2020. 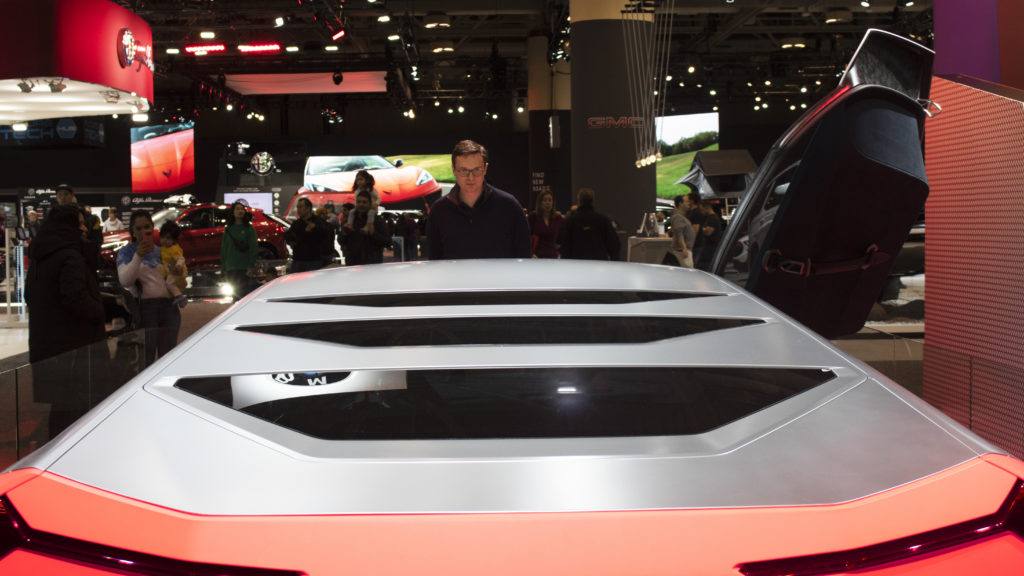 Glimpses of the History and Future of the Automobile Industry

Within the larger Auto Show were several smaller, themed exhibits that focused on particular aspects of car culture. Two of these exhibits—The Disruptors and Oblivion—were of particular note to EV enthusiasts.

The Disruptors exhibit (featuring Cobble Beach Classics) focused on fifteen innovative, disruptive cars from the 20th Century, each of which had been painstakingly restored to the point of being artwork. On display were the 1912 Rolls Royce Silver Ghost (which proved the reliability of automobiles in the early days of the industry by completing a 15,000-mile durability run), the 1934 Bugatti Type 57 Atalante Coupe (featuring one of the first single-piece windshields), and a factory original 1963 Shelby Cobra 289 (widely considered to be the best American sports car ever made) – a personal favourite.

Given our strategic focus at Evolve on tech disruptors—particularly within the automobile industry with CARS, our Evolve Automobile Innovation Index Fund—it was great to spend some time in this exhibit to understand how we’re all standing on the shoulders of giants that came before us.

Likewise, the Oblivion exhibit—which celebrated a generation of classic and collector cars made from the 80s—was a glimpse into some of the coolest and oddest vehicles from that era. Included were the Integra Type R, the Jeep Grand Wagoneer, the Subaru Brat, and other semi-modern icons.

The real highlight in the Oblivion display, however, were the replicas of some famous cars from the future (at least, from the perspective of the 1980s). There was a replica of the DeLorean time machine that featured in the Back to the Future trilogy, as well as a copy of K.I.T.T., the talking, self-driving car from the Knight Rider TV show. The display offered real insight into the role these cars played in helping us imagine how future vehicles could be, as well as reminding us how far automotive technology has come over the last 40 year – making you wonder how today’s electric and self-driving cars will influence future cars.

Speaking of the future, electric cars were on display in full force at the 2020 Canadian International Auto Show.

In a demonstration of how major car manufacturers are now developing EVs and moving away from fossil fuels, BMW, Audi, and others showcased their latest EVs in the main exhibit halls. On display were models that included the Audi e-tron, the Chevrolet Bolt EV, the Ford Escape plug-in hybrid, and the BMW electric car series, including the i8, and Mini Cooper EV.

Hyundai had three types of EVs on display: regular hybrid (gas + battery), plug-in hybrid electric vehicles (with EV plug), as well as fully electric models. Other manufacturers like Ford, Toyota, and Honda (amongst others) seem to be following suit as they expand into the EV space.

What’s becoming clear from the models on display at CIAS 2020 is that EV ranges—the distance you can travel on a single charge—are rapidly becoming the new classification requirements for segmenting the EV market. The EV range will be the new miles per gallon.

Disappointingly, despite the presence of so many EV options from so many major manufacturers, there does appear to be some residual stigma around EVs. For example, the Tesla booth was located in the “Exotic Cars” exhibit. This placement speaks to the mental hurdles people have when it comes to EV technology and the challenges to adoption that EVs face.

That Tesla would be relegated to being an ‘exotic’ brand despite being the poster child for EVs in our generation and for its role in sharing its technology to help foster innovation says a lot about how people continue to think about Tesla as a brand, their technology, and their place in the auto industry despite the company’s success over the last twelve months.

EV Test Drives Get People into Their First Electric Car

Happily, the availability of EV test drives at CIAS 2020 helped break down any lingering uncertainty about the performance or driving experience of an electric vehicle.

Electric vehicle test drives provided by Plug’n Drive and Toronto’s EV Discovery Centre enabled many people to try an EV for the first time. While there are always early adopters of new technology, for others they have to try before they buy, and the move to electric is no different. There is a sizeable segment of the market that will need to test drive and experience EVs for themselves before buying in fully to the EV concept, switching from traditional fossil fuels to their first electric car and the clean energy technology of the future.

Disruptive innovation in tech is where we’ve planted our flag at Evolve, and nowhere is that truer than in our Evolve Automobile Innovation Index Fund (Ticker: CARS). With the automobile industry racing toward electrification, CARS invests in companies directly or indirectly involved in developing electric drivetrains, autonomous driving or network connected services for automobiles.

More than just investing in disruptive manufacturers like Tesla, we’re committed to investing in the less-obvious innovations that will make the difference in the future—ones that every major auto manufacturer is invested in making work.

Contact us today to learn more about how you can shift into gear with CARS ETF.

Mr. Johnson is Chief Investment Officer and Chief Operating Officer with Evolve ETFs. Prior to joining Evolve ETFs, Mr. Johnson was Senior Vice President, Retail Markets at Fiera Capital Corporation, a prominent Canadian investment management firm. Prior to this role, Mr. Johnson served as Chief Operating Officer of Fiera Quantum Limited Partnership, an alternative investment manager. From 2010 to 2012, Mr. Johnson led technology management for a number of business lines at National Bank of Canada. Prior to 2012, he spent 13 years at GMP Capital Corp. in a variety of management roles across institutional brokerage, wealth management and asset management businesses. Mr. Johnson holds the Canadian Investment Manager (CIM) designation, the Derivatives Markets Specialist (DMS) designation and is a Fellow of the Canadian Securities Institute (FCSI). Mr. Johnson serves as a trustee on the boards of the Upper Canada College Foundation, and Trinity College at the University of Toronto where he is Chair of the Committee on Investments. He has been featured in numerous publications and media outlets such as Investment Executive, Wealth Professional, The Globe and Mail, and BNN Bloomberg.