eGaming: The Evolution of The Video Game Industry

There’s been a lot of buzz around eGaming lately, especially with E3, the world’s premiere eGaming event last month in California and the upcoming Fortnite World Cup taking place in New York at the end of July.

Newzoo, the leading global provider of games and eSports analytics, predicts that in 2019 alone, the global electronic gaming market is expected to generate total revenue of $152 billion, seeing a +9.6% year over year increase. Newzoo also forecasts that the global eSports market will generate $1.8 billion by 2022. 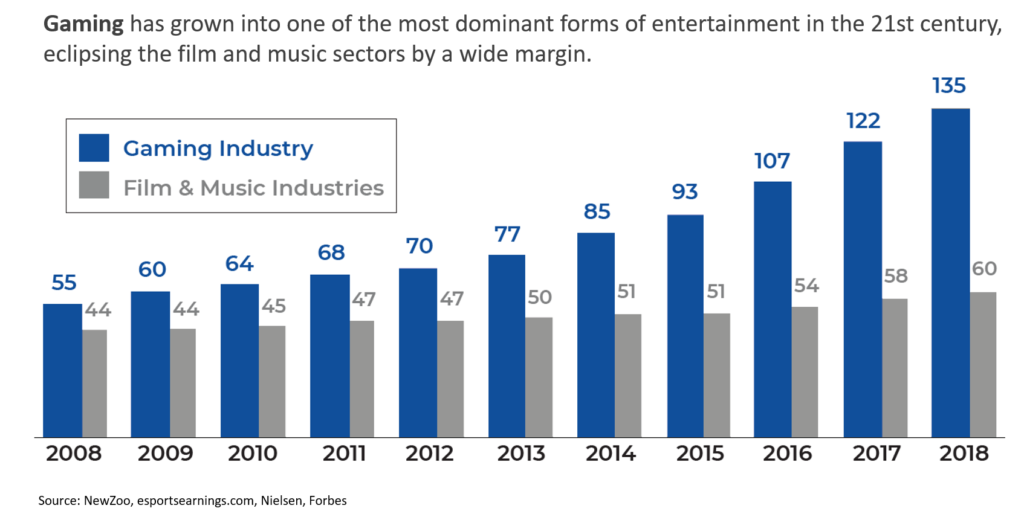 What do all these numbers mean? Before we dive into the projections and opportunities, what exactly is the difference between eGaming and eSports?

eSports is a shortened term for “Electronic Sports” and refers to the professional and competitive gaming side of the eGaming sector. Sometimes in sold out arenas streamed to millions of global online fans, competitors from different leagues and teams square off in household games, beloved by players all over the world. Examples are Fortnite, League of Legends, Counterstrike, Call of Duty, NFL Madden and more. 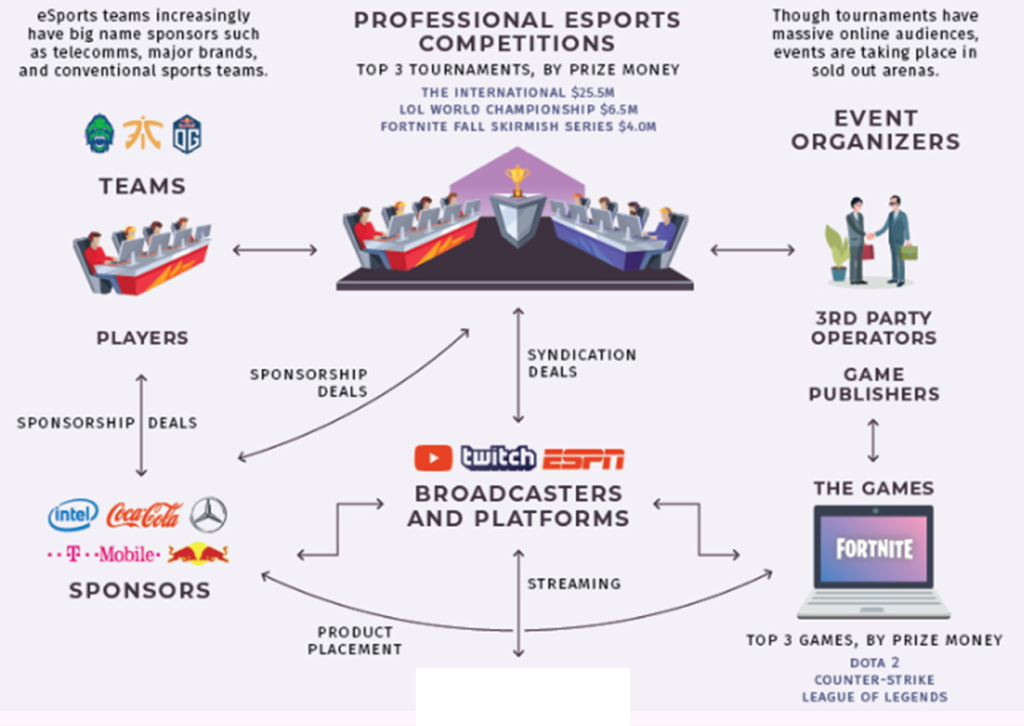 Thanks to popular streaming services like the Amazon-owned streaming platform Twitch, millions of eGaming fans from all over the world can tune in to watch their favourite gamers compete and pick up some tricks for their personal gaming arsenal. This captive eSports audience has introduced a wealth of additional revenue streams to the eGaming sector, but we’ll get to that in just a moment.

The Evolution of eGaming

There was a surge in eGaming popularity in the 2000s but eGaming has been around for a lot longer. Tournaments and a passing fascination with electronic games as a spectator experience trace back to the late 1972 when the earliest known organized eGaming competition took place at Stanford University for the game Spacewar. Students attended the “Intergalactic Spacewar Olympics” and the grand prize was a year’s subscription to Rolling Stone. The 1980s saw Tron and the 1990s brought about the Wizard.

Long before online games and the idea of dedicated gaming PCs, there were arcades and home entertainment systems.

eSports didn’t come about by accident, the momentum behind the phenomenon started right along with one of the earliest arcade games, Pong.

Today, eGaming indexes continue to expand as industry reports show massive improvements in reach and appeal for this slow-burn technology.

A tournament of Space Invaders at the start of the decade signalled the first major competition of electronic games. With over 10,000 in attendance and a cash prize, the skills displayed were impressive but niche. 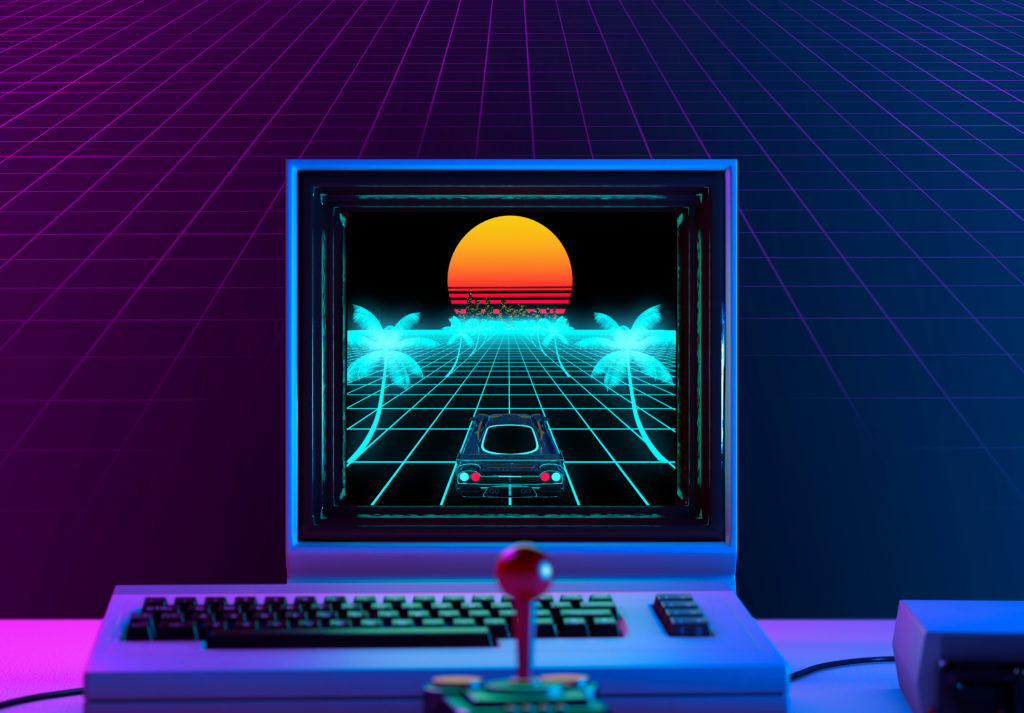 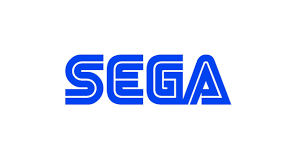 Soon after, professional cyber athlete leagues formed and the largest tournaments of the day were held in South Korea for StarCraft. Prizes were in the $15,000 range and rising. Many of the modern models of ladder participation to play in eSports events started here.

In 2010, StarCraft 2: Wings of Liberty was released and experienced continued growth. The GSL (Global StarCraft 2 League) featured over 50 million views in its last season.

Dedicated gaming channels online such as Twitch.tv and YouTube began spending money on venues and rights to broadcast events. This influx of money, along with entrenched styles of games set the stage for rapid growth.

Multiple leagues hold tournaments for their respective conferences and worldwide players and viewership add to the success of the industry as a whole.

The appeal of the industry stems from several of the same places as traditional sports, with some key differentiators.

Both traditional competitive sports and eSports feature an exploration and exhibition of skill. In our current data-driven world, the analytics behind these games are even more targeted and enhanced, allowing greater opportunity for eGamers to engage through statistics, measure progress, compete against friends and further hone their gaming skills.

For sponsors, industry interests, and advertisers, the appeal is the same. Increased viewership leads to a great amount of money that can be generated in traditional ways and the data behind this captive audience allows the opportunity to target promotions to key demographics.

The worldwide appeal translates into additional global revenue opportunities that normally require dedicated partnerships and global broadcasting deals. The online nature of most eSports decentralizes many of these costs and contract issues. This is one of the key advantages to the eSports market over other mainstream forms of competitive sports. 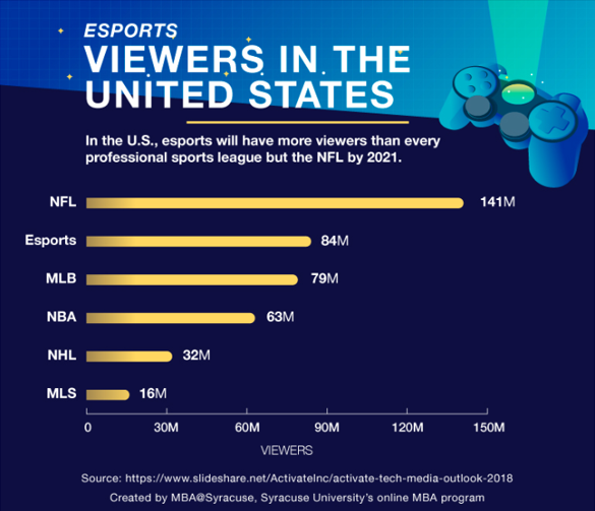 Also, the built-in commentary and all-season hype created through streaming services make the eGaming sector an evergreen opportunity for continued revenue generation and growth potential. Players make additional revenue broadcasting their training sessions through services such as Twitch and Youtube.

With no off-season, constant interest and consistent viewership, the very platforms that produce players and fans also broadcast the events. This neat loop forms a captive market.

The player pool is another differentiator between eSports and other mainstream competitive sports. Unlike most major league sports, which favour certain body types and physicality, eSports is a more inclusive and sees a wider variety of participants. However, a high degree of skill is still required, and healthy players tend to be more focused and able to react than the unhealthy or out of shape, but there are fewer barriers for those who wish to take part in competitive eGaming.

The publishers sell units of games or additional piecemeal purchases in the games such as DLC to fans and players alike. Tournaments and broadcasts serve as commercials, selling the product itself.

Video games are played on computers or consoles. This incentivizes manufacturers of core systems and peripherals to sponsor teams.

League of Legends, published by Riot Games, pulled in $5.5 million in ticket sales to in-person events in 2018. Their earnings from sales of in-game currency and items topped $2 billion.

eSports players can compete for a living because of the growing size of prize pools for eGaming events. These pools are funded by tournament hosts, game companies as well as the sale of passes and merchandise. In 2018, a total of $6.52 million U.S. was awarded in eSports prizing.

The majority of eSports supporters live in the US, South Korea, and China. All of which have huge economies with rapid growth potential in tech sector jobs and interests.

Colleges across the U.S. and South Korea offer scholarships for eGaming players, banking on the growth of the industry. The National Association of Collegiate Sports formed to govern these bodies.

The eSports era is here and will expand into the foreseeable future.

Get involved with this and other opportunities through our education program or check out the Evolve E-Gaming Index ETF. 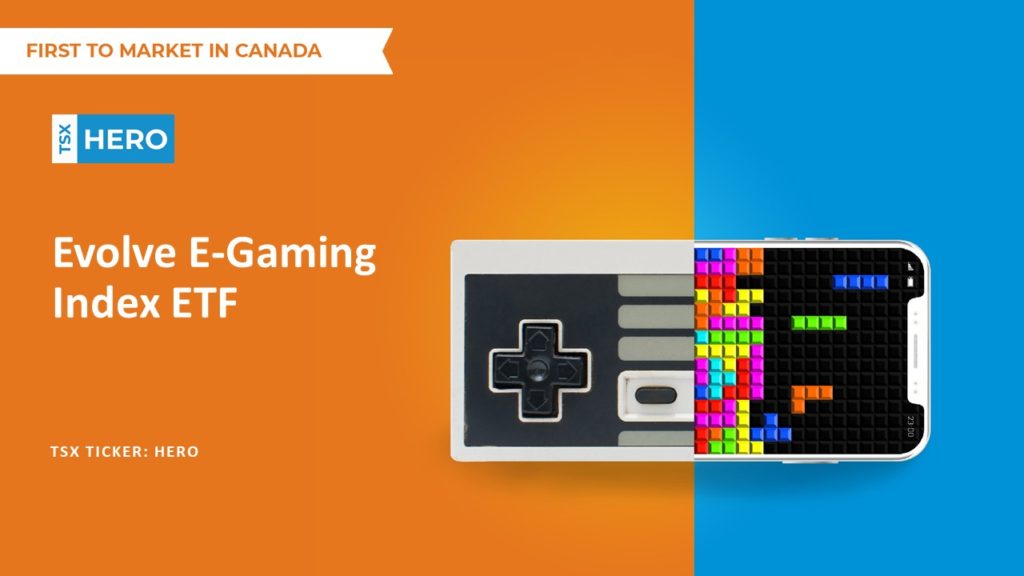